Impactasaurus' vision is to help all organisations, benefiting society, to understand their social impact. In the past, we have focused our efforts mainly on smaller organisations, as they lacked suitable software to capture this data. But it is becoming clear that larger organisations are also looking for simple, configurable and modular tools.

So where is this useful?

Getting started with organisation switching is simple, just request an invite from the organisations you work with and login before accepting them. Once you belong to more than one organisation, you can switch between them from the user dropdown menu in the top right of the app: 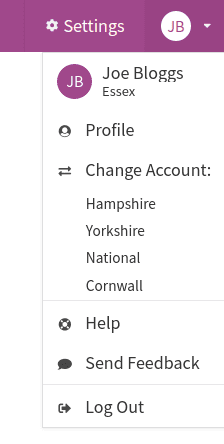 If you would like to create a second organisation, our support team would love to help, just drop us an email.